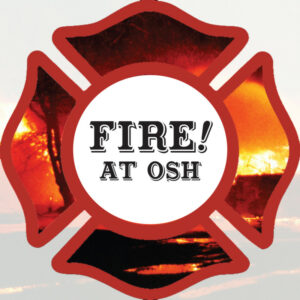 The Museum opened its latest exhibition Fire! at OSH in our rotating exhibit gallery today and will be on display until May 2017. Featuring objects from the Museum’s collection, Fire! highlights fire prevention and fire fighting at the Hospital.

The threat of fire at the Hospital has been an issue historically, with several OSH Superintendents noting how catastrophic the consequences would be if a major fire broke out on campus. As stated in the 1897 Biennial Report:

The uncomfortable trust has long been recognized that our building is so constructed that if the incipient flames were not quickly extinguished, the whole structure would rapidly be consumed.

Given the population size, building construction, and patient and staff behaviors, the Oregon State Hospital faced unique challenges in fire prevention. By looking at the ways the Hospital equipped their buildings, educated their staff, and the patients they served we can get a better understanding of the history of fire at OSH. 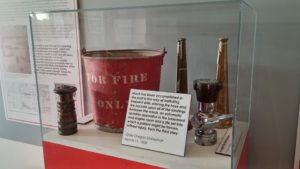