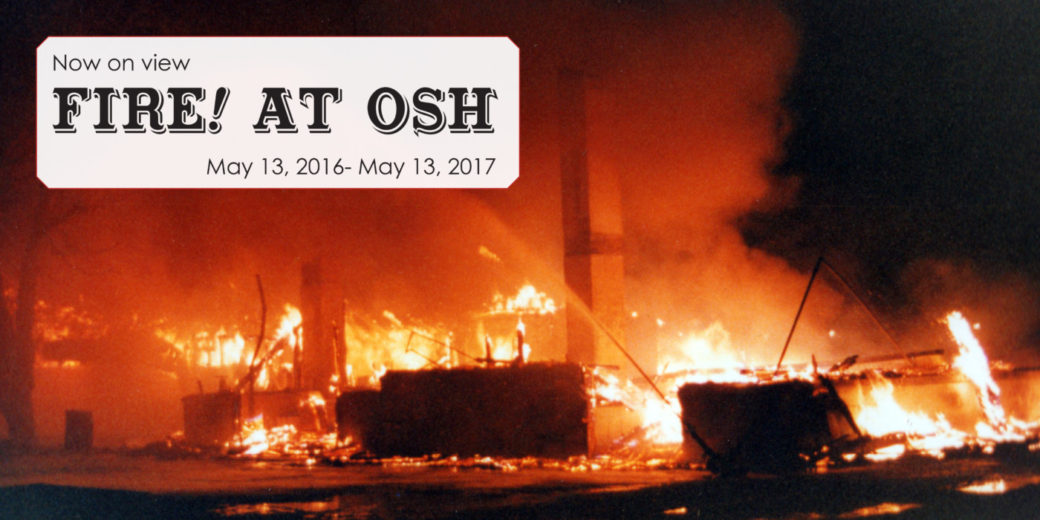 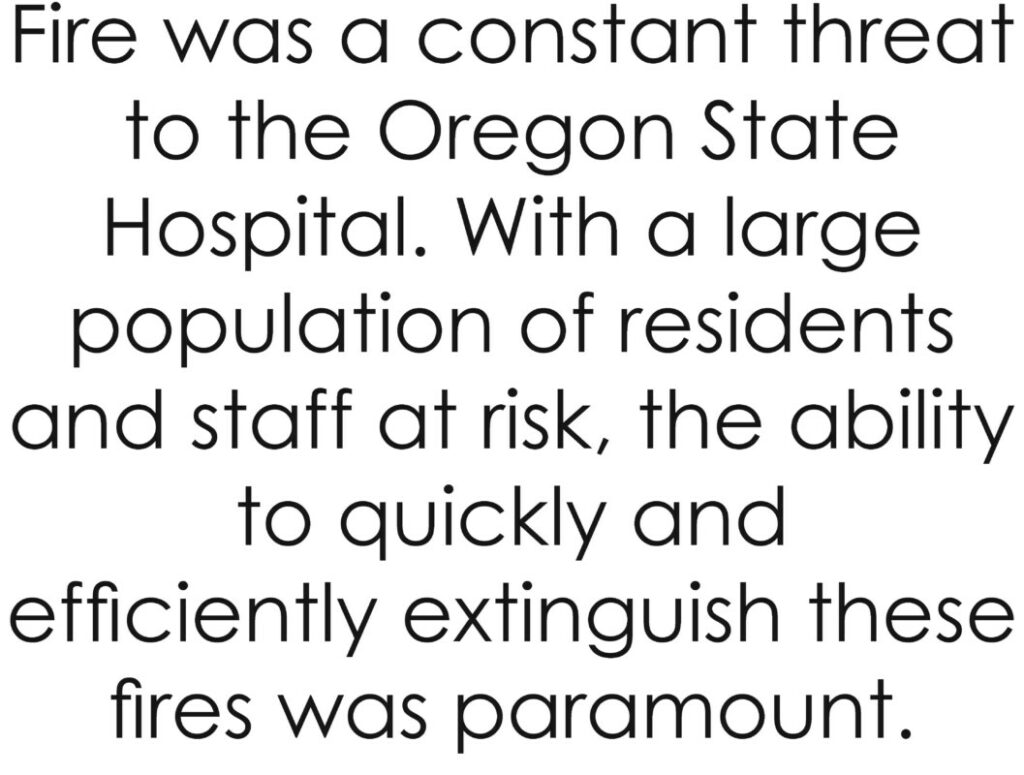 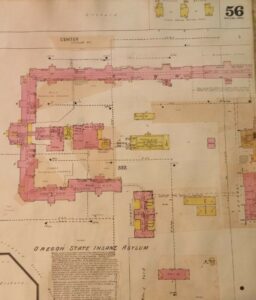 The uncomfortable truth has long been recognized that our building is so constructed that if the incipient flames were not quickly extinguished, the whole structure would rapidly be consumed.
-1897 Biennial Report

Architecture
In his book, On the Construction, Organization, and General Arrangements of Hospitals for the Insane, Dr. Thomas Kirkbride recommended that mental hospitals to be constructed “in the most substantial manner” using brick or stone instead of wood. The main reason Kirkbride gives against building wooden hospitals is the risk of fire. While the exterior of the Oregon State Hospital is made out of the Kirkbride recommended brick, lumber features heavily in its construction. This wood, coupled with the wood-fired early heating system, created a serious fire risk.

Some attempts were made to address the threat of fire within the building plans. For example, OSH implemented the use of iron covered fire doors between the wings and wards of the hospital. As reported by the Morning Oregonian in 1883, this was a strategic choice:

The connecting doors through main and wing wards, and between the wards, chapel and
office building are constructed of wood, substantially covered on each side with heavy sheet iron…having been practically demonstrated that doors so constructed withstand the heat more successfully than do those constructed wholly of wrought iron, which warp when exposed to the fire, forming orifices which create a draught, forcing the flame through the openings thus made.

Rolling Steel Door plans for tunnels under the 40 Building, 1947 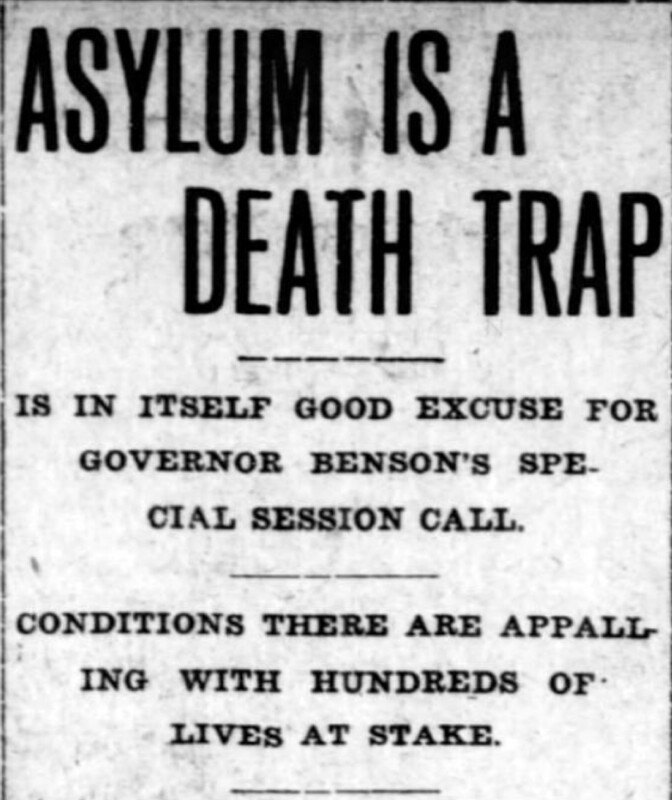 Article from The Oregon Statesman March 11, 1909 detailing conditions at the hospital including fire issues. 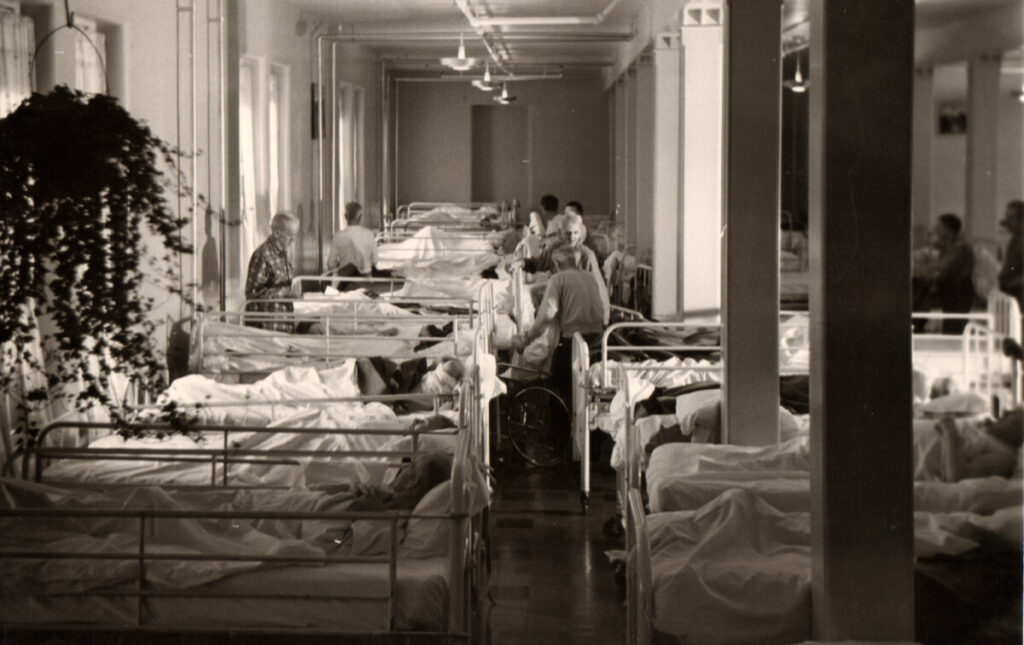 The population of the Hospital provided a number of challenges to fire safety at the institution. For a majority of the Hospital’s history, overcrowding and increasing population size meant that a growing number of patients had to occupy less and less space. Prior to installing a central heating system, fire was used in heating the Hospital. Using flammable linseed oil to routinely polish the wooden floors also created an early threat to destruction by fire.

Noting when fires were lit for heat in the hospital was a daily occurrence in night and day logs. OSH Night Log Book, 1921

Here in cold weather, more than 30 fires are kept going, with woodwork all about and with the necessity of employing more or less, ‘patient’ help, the danger from this condition of affairs is easily understood.
-Daily Oregon Statesman March 11, 1909 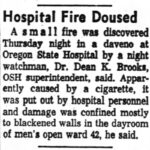 Patient behaviors could also have contributed to fires at the Hospital. The allowance of patient smoking for example, appears frequently as the cause of small fires reported in the Bulletin of the Oregon State Hospital. There are also several instances of individuals, being admitted to OSH due to arson, pyromania, or fire-setting. While there have been a number of fires that were purposefully set by patients, it would appear that the majority of fires that have occurred at OSH were accidental. 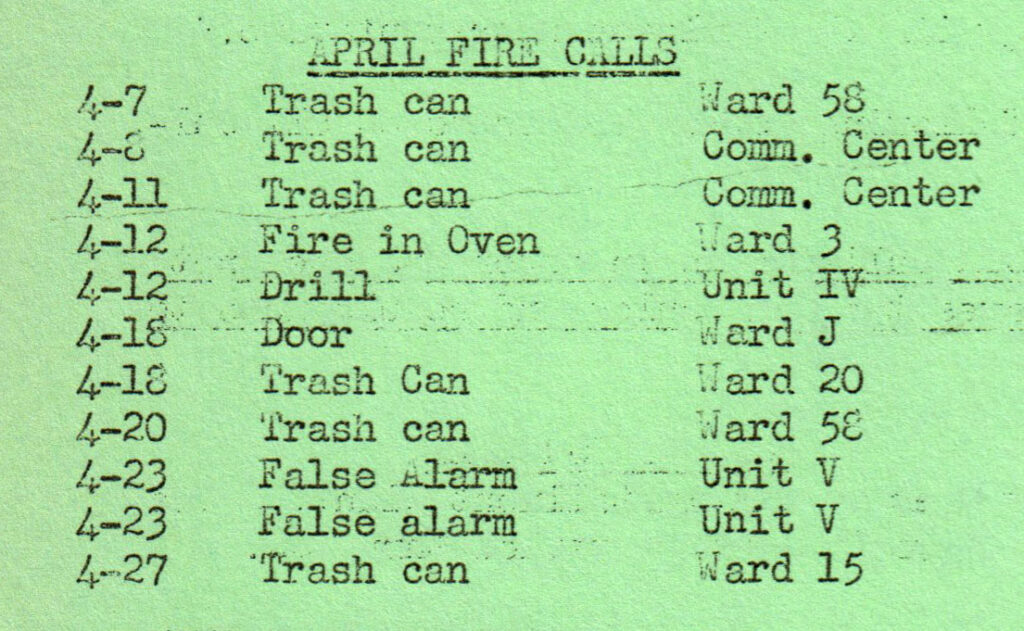 April 1966 fire calls from the Bulletin for the Oregon State Hospital. Number of fire calls in 1966 totaled around 115. 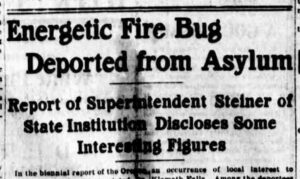 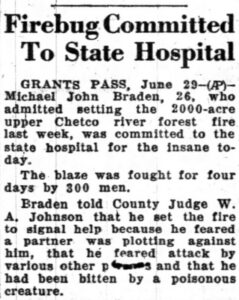 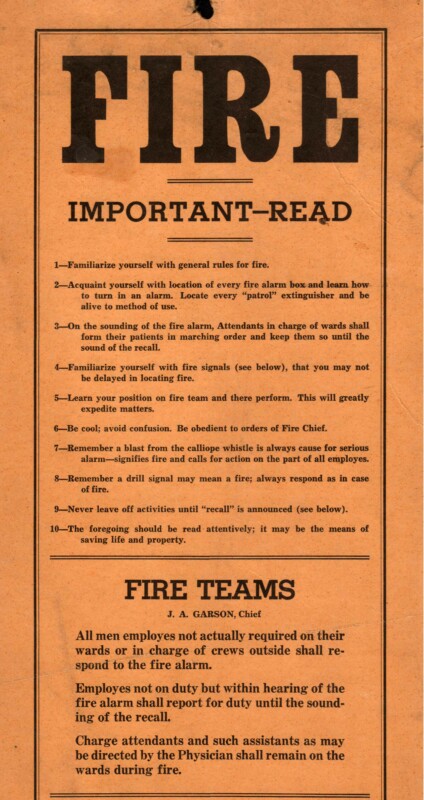 The fire system taken altogether, including hose service, alarms and discipline, is the simplest and most perfect that could be conceived in so large an institution.
–Evening Capital Journal April 27,1898

For a portion of the Hospital’s history, OSH was located outside of the Salem city limits and at quite a distance from the city’s fire services.
Under the direction of the Engineering Department, a small fire department was formed, which could provide a quick response to fires on the hospital campus. The Hospital’s fire department worked in conjunction with other departments, including the Salem Fire Department and the Oregon State Penitentiary.

Oregon’s asylum is now supplied with as perfect machinery and apparatus for fighting fire as is any institution
of the kind in the whole world.
-The Oregon Statesman August 8, 1890 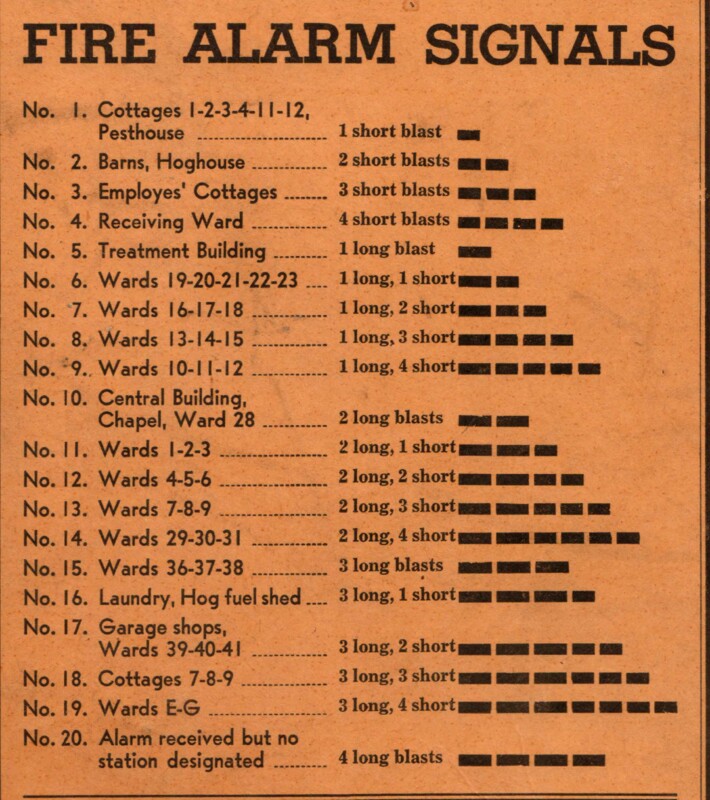 In order to alert and mobilize patients and staff, the Hospital utilized a horn that blasted a signal out to all areas of campus. To denote where the fire was taking place, the signal used a combination of short and long blasts and provided a key for reference. If you lived or worked at the Hospital, do you
think you could decipher each signal?  Study the key and then listen to each sample and see if you can figure out which area needs assistance!

Given the size of the Hospital, training and education for patients and staff has been crucial to success in avoiding large scale fires. Fire safety training occurred frequently with training programs teaching staff to use fire equipment like extinguishers and hoses as well as how to move patients safely out of Hospital buildings. Countless newspaper articles that mention fires at OSH, also comment on the efficiency of patient and staff movement during the crisis. 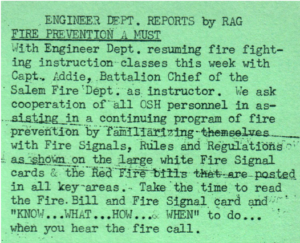 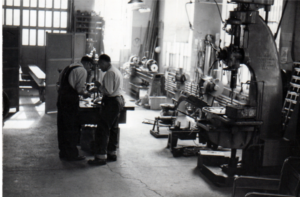 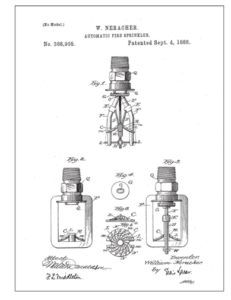 Drawings of automatic fire sprinkler system for US Patent Application, 1888.

Several superintendents to OSH requested from the Board of Control and the state legislature for improvements to fire safety equipment.  In addition to fire safety measures taken when the hospital was first built, a comprehensive fire system was put into place under the management of the Engineering Department.  This included hydrants and a cistern to supply water, an automatic fire alarm system, and a sprinkler system. 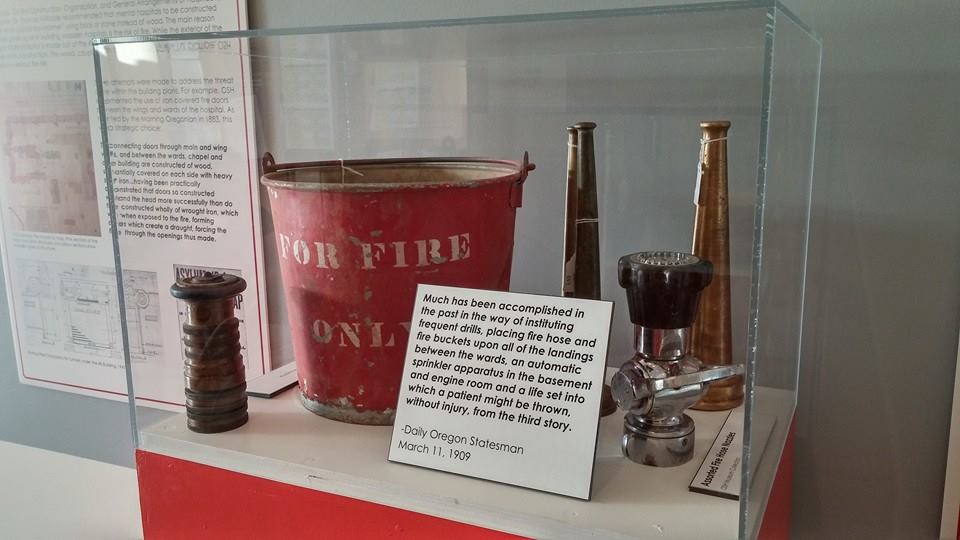 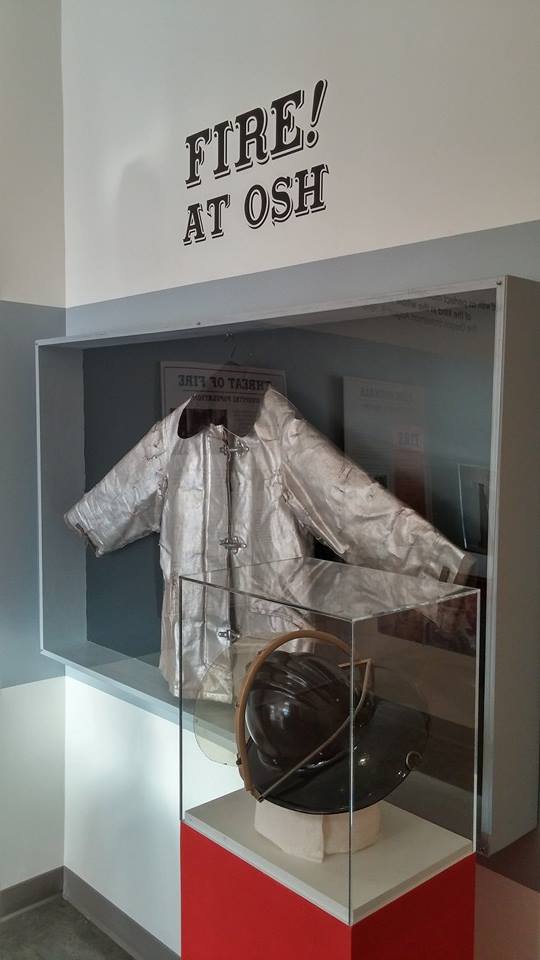