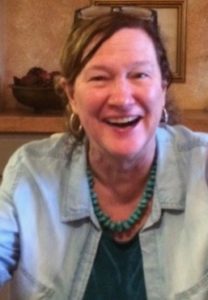 Beth Carmack left us far too early. She will be fondly remembered and painfully missed by those who loved her.

Born Mary Elizabeth Carmack in 1947 to Charles Edwin and Earline Kincaid Carmack, Beth was the middle child who often sought places of tranquility to be found in the hustle and bustle of the baby boom. A bright child with masses of corkscrew curls, early photos of Beth foreshadow the delight she found in family, friends, and her natural surroundings. Her diligent scholarship and quick wit earned her a place at Scripps College, Claremont among women who realized that being smart was both a benefit and a responsibility. There she earned a Bachelors degree in history and a teaching credential that allowed her to teach in both high school and college classrooms. She also blossomed a sense of compassion and community that led her to her next career as a generous, and tireless supporter of those who sought her counsel in a 30+ year therapy practice. She was licensed in California as a Marriage and Family Therapist on Valentines Day in 2009.

At her heart, Beth was a caretaker. This was a role that was thrust upon her by ailing relatives who rarely even broke the surface of the gratitude she was due. It was a role she gladly played for friends and clients who sought strength. And it was a position she liked best as she fulfilled the roles of aunt and great aunt to precious nieces and nephews.

She never tired of learning, whether in formal roles such as graduate school at Santa Clara University or in spontaneous explorations of new places and cultures with friends or family. She was a “let’s do it” kind of woman, gleefully signing on to excursions, adventures, and, occasionally, pranks. (Some of her cousins were naughty and she egged us/them on.)

Beth wasn’t a saint. She liked her champagne bubbles and big red wines. She relished her lazy mornings in her nightie with a big mug of tea. She often made economic choices that she later regretted. And while she was generously indulgent of most faults in others, she hated bigotry in all its forms and minced no words in condemning its caustic effects. She opened her heart but kept her private life painfully private. No one of us knew how troubled she was in the last weeks of her life.

We lost Beth in a moment of crisis; a sad, brief moment when she couldn’t find the sunshine she so often radiated. She was preceded in death by her parents, grandparents and her brother James. More importantly, she is survived by those she ardently loved: her brother Condie, her nieces Shannon and Lou and their families, and her nephew Mac with whom she shared an everlasting bond. She is also survived by all of us who morn her passing.