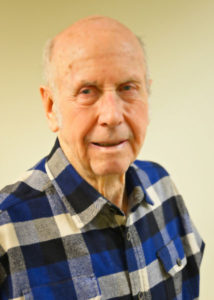 Dr. Joseph H. Treleaven was an integral part of the Oregon State Hospital, the Oregon Mental Health Services, and the Museum of Mental Health. In fact, it was Joe’s idea to start a memorial program at the Museum so that friends and colleagues could express their fondness and admiration for those departed. It is with sincerest sorrow that I now write such a page for Joe.

Joe was born on a farm in the prairies of Saskatchewan, Canada. He graduated from the University of Alberta’s School of Medicine in 1950 and then moved to Topeka, Kansas to undertake a psychiatric residency at Menninger Sanitarium and Psychopathic Hospital. He and his family moved to Salem, Oregon in January 1953 when he became a staff psychiatrist for Oregon State Hospital.

In 1963, Joe was appointed by Governor Mark Hatfield to be the first Executive Director of the Mental Health Division in the State of Oregon. During this time he was instrumental in establishing Community Mental Health Centers around the state. He returned to OSH as a forensic psychiatrist until being tapped again to lead the Mental Health Division in 1978. He and former OSH Superintendent Dr. Dean Brooks often joked about which one of them was the current supervisor of the other at any given time.

When the movie One Flew Over The Cuckoo’s Nest was filmed at the Oregon State Hospital, Joe agreed to play a part in the movie. Afterwards he said that people more often asked about that experience than about his real work but he used their curiosity to turn the conversation towards teaching about mental health. Joe’s legacy of compassionate caring for patients and ethical administration of public funds have provided examples for generations of caretakers who have followed.

To all who met him, Joe was a genuinely nice man. He was smart and funny, gentle and firm. He volunteered for several years at the Museum of Mental Health as a museum guide and front desk greeter. Lucky were the visitors who found themselves being toured by Joe; he knew more than any other volunteer about the Hospital’s history, the arc of change in mental health care, and the emerging research about treatment and cure. Even after his health precluded volunteering at the Museum, Joe continued his commitment to the Museum by creating the memorial program and arranging Museum presentations and tours for residents of Capitol Manor.

Joe is survived by his partner Nina Hipperson, four children and two grandchildren. A conference room in the Oregon State Hospital is named for him. He is (and will continue to be) greatly missed.