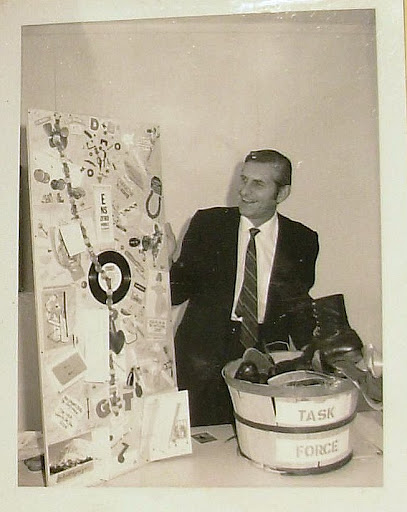 Superintendent Brooks with a bushel of shoes, 1969.

On September 15, 1969, Dr. Dean K. Brooks, then superintendent of the Oregon State Hospital, gave a speech before the Association of Medical Superintendents of Mental Hospitals at a meeting in Houston, Texas.  In it he described an experience while visiting a mental health facility on the East Coast that affected his outlook on institutions across the country.  While visiting a ward, he stumbled across a basket of shoes.  Women living on the ward were required to take off their shoes at the end of the day and put them in the basket.  The shoes could then be collected on a first come first serve basis the next morning.

This bushel of shoes represented to Dr. Brooks a dehumanization of the people living on that ward.  As he writes:

Dehumanization can be defined as the divestment of human capacities and functions and the process of becoming or the state of being less than a man.  It does not occur exclusively in mental institutions.  It also occurs in nursing homes, correctional institutions, Indian reservations, colleges, the military–in any situation where one person is responsible for making day-to-day decisions about the comfort and welfare of others.

This experience led to the creation of a patient, staff and community task force that identified 25 areas of concern at the Oregon State Hospital in the areas of:  clothing, dental hygiene, bathing, toileting, grooming, sleeping, recreation, eating, housekeeping, patients’ money and personal possessions, maintenance, aesthetics, living space, and admission and discharge routines.

Dr. Brooks published his speech in Hospital and Community Psychiatry the journal of the American Psychiatric Association.  The full story of the Bushel of Shoes can be read here: http://oregonstatehospital.org/wp-content/uploads/2009/02/a-bushel-of-shoes-dean-brooks-md.pdf