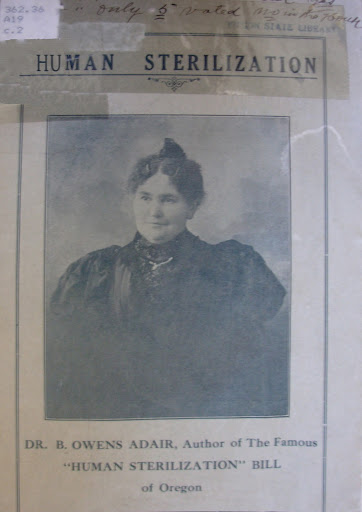 One of the most vocal proponents of women’s suffrage in Oregon was also the leading proponent of Eugenics legislation which would affect the lives of hundreds of patients at the Oregon State Hospital.  Beginning in 1907, Dr. Bethenia Owens-Adair lobbied the legislature for implementation of a Sterilization Bill intended to improve society by sterilizing those deemed criminals, insane or developmentally disabled.  Her bill passed in 1909, only to be vetoed by the governor. Nevertheless, similar legislation became law in 1923.  The Sterilization Law remained on the books until 1983 and caused the forced sterilization of over 2,500 people in Oregon’s prisons and mental health institutions.  In 2002, Governor Kitzhaber made a formal apology to those who had been forcefully sterilized under the law.

[1]
The following is an excerpt from Dr. Owens-Adair’s Tract entitled Human Sterilization published sometime around 1910.[2]

In submitting this little publication to the public, it is with the desire, the hope and belief, that the ever watchful eye of our great commonwealth, will appreciate the immence [sic.] value of this process for preventing disease and crime through propagation.  Since 1883 when I said to the physician who was in charge of the Oregon Insane Asylum, that if the time ever came, that I might be permitted, I would then use my pen and my brain along these lines.  Since then I have used my tongue many, many times, in season and out of season, and I have received in return many rebukes and much good advice, as to modesty, being a priceless gem which every woman should wear.   But not until 1904 did the first opportunity come, when I could use my pen and I assure you I lost no time in sending off the following communication to the Oregonian, and my delight at seeing it in print was beyond expression, to say that this publication shocked my family and many of my friends would be putting it mildly, I am older now and my tears do not lie so shallow (as mother said) as in my childhood days, and there is something in getting used to unpleasant things and yet, I am not innured, but I can go right on smiling just the same.  To illustrate the trend of thought, only 7 years ago when I wrote my first communication to the Oregonian I received four letters all eulogizing and congratulating me on my bravery, etc., but the interesting part was, that those letters were all nameless, who would think of addressing me to-day on this subject without signing his or her name; not one, no not one.  The world is being educated along these lines and is seeking for the purification and betterment of humanity, which in time will be found and vertified [sic.] in the yet unborn children whose parents blood shall be free from disease and crime.  Through this publication I shall try to prove what I have been preaching for 30 years, that the power of transmission from parent to child, is a law which holds good through all life and dates back from the beginning of time,  “Like begets like” from which there is no escaping.  I shall produce statistics and quote from some of the great thinkers of the age especially from Judge Warren Foster, the Superior Judge and the highest and greatest criminal court in America.  I advise all who can read “Hereditary criminality and its certain cure” by Judge Foster in Pearsons November 1909.  He advocetes [sic.] sterilization as the “certain,” and only cure.

My first article on this subject published in the Oregonian was as follows:  This is a deep and serious subject, and one far too great to cope with in its entirety, yet I repeat, much can and should be taken.  Some of the worst ills to which humanity is heir, such as insanity, epilepsy, and cancer, are almost certainly transmitted by the immediate progenitors.  The greatest curse of the race comes through our vicious criminal and insane classes, and to my mind this is the lement that should be dealt with, not by chloroform or strangulation, but by the science of surgery, for if their power to reproduce themselves were rendered null a tremendous important step in advance would have been taken, not only without injury to life, but often with positive benefit to the victims themselves.

Over 20 years ago I visited our State Insane Asylum at Salem.  My friend Dr. H., then in charge, received me graciously, and conducted me through the various wards.  On our way from the wards back to luncheon I said: “Doctor, this is a horrible phase of life; and when is it to end?”  “I do not know.  It is hard to tell,” he replied.  “If I had the power,” I continued, “I would curtail it, for I would see it it that not one of this class should ever be permitted to curse the world with offspring,”  He stared at me and finally said: “Would you advocate that method?”  “I certainly would, if I were not a woman, and a woman M.D., to whom, I know too well that at this day and age it would simply mean ostracism,” I answered.  “Well,” he rejoined, “I beg you not to mention this subject to my wife, for she would be shocked and horrified.”  “I shall not mention it to your wife, but I want to tell you right here that if I were in control of this institution, as you are, I would at least give many of these pitiable unfortunates the one chance of recovery, which might restore their reason.  You know, doctor, as well as I do that hysteria and insanity are often due to diseased reproductive organs.  Think of those loathsome victims of an unnameable vice under your charge.  It would be nothing less than common humanity to relive them of the source of their curse and destruction by a simple surgical method that might give them a chance to recover their reason.”

Eight or ten years since, in a conversation with an eminent attorney concerning a mutual friend and near neighbor, whose wife had recently called upon this attorney at dead of night to protect her and her children from her husband, who had for the second time become suddenly insane, he said to me.  “This is terrible.  But who would have thought of this level-headed business man going insane?”  I responded, “Remember, we know it is in his blood by family inheritance.  And now I am going to say what will shock you, which is that every person admitted into an insane asylum should be so dealt with as to preclude reproduction.” Instantly and warmly he exclaimed, “I sanction that, and I will go farther by including every criminal that goes through the penitentiary doors.” Thereupon we shook hands on it then and there, feeling sure that the time would come when the commonwealth forced to grapple with this vital subject, would be able to adopt these measure with the full assent of a majority of its citizens.