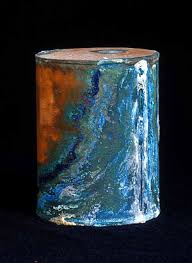 The State of Oregon is seeking public input and feedback regarding a memorial to honor the more than 3,000 unclaimed cremains of people who died while living in state institutions.  A public meeting about the project will be held, Thursday, August 18, 2011 in Salem at the State Lands Building, 775 Summer St NE.

The story of the cremains made national headlines in 2005, after they were “rediscovered” in storage in the hospital basement.

[1] The story was graphically illustrated through the work of photographer David Maisel, and the images of deteriorating copper canisters soon became synonymous with other problems with the state’s mental health system.[2]

The history of the cremains is a long and complex one.

Almost as soon as the Oregon State Insane Asylum was opened in 1883, there was a need for funerary services.  Death was part of daily life at the Asylum.  Before nursing homes, many elderly patients with dementia were sent to the Asylum when their families could no longer care for them.  The 1896 Superintendent’s report complained about the high death rate at the hospital and explained it this way:

This death rate has been increased, as usual, by the fatality among senile cases, for whom other care and treatment should be provided.  When committed here they must be received, and faithfully cared for; but in too many cases this simply means quite nursing in beds of helplessness, briefly preceding their being carried to their last resting place:  brought here to die and be buried.  It is an unpleasant theme, but the actual condition remains with us, and certainly calls for correction.[3]

The first death at the Asylum occurred November 6, 1883 (just a little less than two weeks after the new facilities had opened).[4]  Mrs. Lizzie Hazelton of Umatilla County was buried in the Lee Mission Cemetery.  The need for a separate burial ground for the Asylum was soon recognized and a cemetery was established to the southeast of the Lee Mission Cemetery.  This burial ground became known as the Asylum Cemetery and it served as the final resting place for people who died at the Asylum and whose remains were not claimed by their relatives.  The first burial in the Asylum Cemetery was Frank Holdridge, an Illinois native who died in the hospital November 11, 1883.  It should be noted that many families came and claimed the remains of their loved ones upon their death and took their bodies to be buried in their home towns.  Ledgers keeping death records from the hospital provide information on where these patients were taken for burial.  Burial at hospital was a last option.

Susan Bell has compiled a listing of all of the burials in the Asylum Cemetery through its disbanding in 1913.  It can be found at the Salem Public Library, Willamette Heritage Center, and Oregon State Library for those interested.

With the growth of the hospital, maintaining the Asylum Cemetery became difficult and the state decided to establish a system to deal with the growing number of unclaimed remains at state institutions.  In 1913, the state legislature passed Senate Bill 109 which:

1)     Established a crematorium at the Asylum

2)     Required cremation (at the Asylum crematorium) of anyone who died at a state eleemosynary, penal or corrective institution if the body was not claimed by notified relatives within a week of death.

3)     Required the exhumation and cremation of all those buried in the Asylum cemetery and the removal of the headstones and monuments to the institution’s cottage farm property.[5]

Under legislative approval, the hospital contracted with W.T. Rigdon, to exhume the remains of those buried in the Asylum Cemetery.  The project was overseen by Charles Claggett and took nearly a year to complete.  Susan Bell notes that, ironically, although the provision went into effect on June 3, 1913, the hospital was still interring bodies at the cemetery through 1914.[6]

The cremated remains from the Asylum Cemetery were moved to storage within the hospital.  The headstones were moved to the Cottage Farm property out by Turner.  Ironically, in 1959, work crews rediscovered the headstones and thought they had stumbled across an abandoned burial ground. [7]

The hospital continued to be the final resting place for the unclaimed remains of those people who had died at a growing list of state institutions.  In 1937, the Oregon State Hospital entered into an agreement with the Oregon Funeral Directors Association.  In this unique arrangement, the association funded a staff member to work at the Oregon State Hospital morgue to provide mortuary services for those who died at the State Hospital and other State institutions.  A 1964 Capital Journal article shows Vern Billings, the hospital’s mortician, standing in front of a vault of gleaming new copper canisters containing the remains of more than 3,000 individuals who had not been claimed by their relatives.[8] 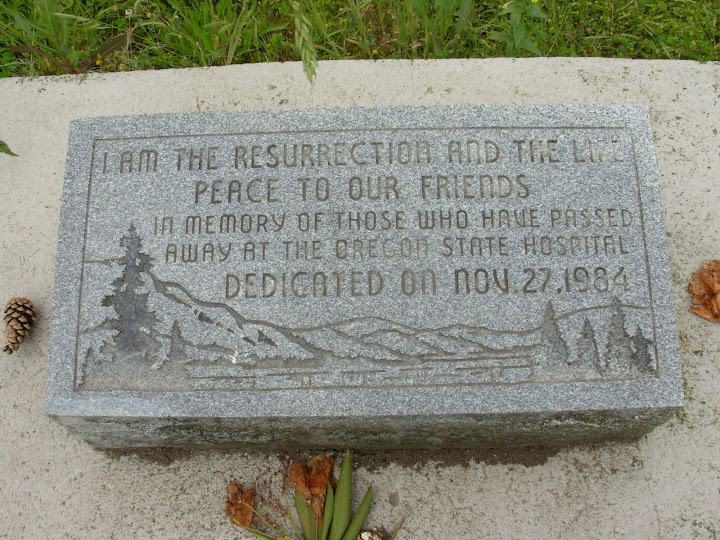 In 1976, the cremains were moved from their “tiny basement room” to a final resting place.[9]  The old pond on the west grounds, west of today’s tennis courts, was re-designed as a memorial circle.  Twelve underground vaults were installed and the cremains canisters were numbered, moved and rededicated in a ceremony on November 27, 1984.  The dedication stone can be seen today, as can the metal plaques that were placed around the circle to show the location of the vaults.  It finally looked as if the cremains had been given a respectful final resting place.

Unfortunately, the vaults began to leak, and it was determined that the arrangement did not meet state burial standards.  The cremains were exhumed from the vaults and placed in a basement room at the hospital to prevent further damage.  It is in this state that the cremains were rediscovered in 2005.

The publicity surrounding the rediscovery of the cremains in 2005 spurred action.  Lead by Senator Peter Courtney, a task force was assembled to study and find a way to take better care of the cremains.  The committee worked with the hospital to rehouse the damaged copper canisters into new black boxes.  The Oregon State Legislature passed a law in 2007, which gave DHS (the Oregon State Hospital’s governing body) a special dispensation to publicize a list of names of those cremated patients for the purposes of giving family members and opportunity to claim their loved ones and to create a public memorial for those unclaimed remains.  The legislation was necessary because Oregon State Law protects the privacy of patients at the Oregon State Hospital and prevents their names from being public record for 75 years.  The records office began publishing names in the paper and has created an online database for those searching for their loved ones.  You can access the database here.

Oregon’s Percent for Art in Public Places Program has provided funding for the memorial, as well as a committee of stakeholders and advisers to oversee the successful implementation of the project. As one of the most important public art projects in the state’s history, the memorial project offers artists an opportunity to transform a deeply meaningful history into a public space of great poignancy and beauty. An open call to artists resulted in more than 100 applicants. Lead Pencil, comprised of the artist team of Annie Han and Daniel Mihalyo, was selected. This meeting is an opportunity for members of the community to meet with the artists. Feedback, questions and input are welcome by email, osh.project@state.or.us and will be shared with the artists on an ongoing basis.

[2] David Maisel’s book Library of Dust was published in 2008.  You can learn more about the project here: http://davidmaisel.com/works/lod.asp

[5] Senate Bill 109. Filed in the office of the Secretary of State February 25, 1913.  Republished in Bell, Susan. The AsylumCemetery 1883-1913, Salem, MarionCounty, Oregon. Salem: Willamette Valley Genealogical Society, 1991. pg 12.  Bell also notes that the crematorium had been installed in 1910, three years prior to the passage of the legislation.