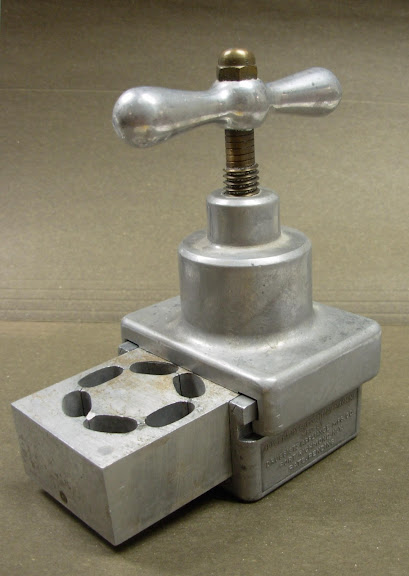 The device pictured to the right is a suppository making machine.  It, along with two additional molds, were found in a case that was moved from the old Fairview Hospital to OSH when Fairview was closed and added to the material stored in OSH’s “Gold Room” for historic artifacts.

The machine was patented in 1924 by Samuel K. Applebaum.  The inscription on the device’s frame reads: “Applebaum Suppository Machine MFD. By Druggists Appliance MFG. Co., Port Richmond, N.Y. Pats. Pending.”  It is possible that this machine was made prior to the 1924 patent issue date.

[1]
The web-based Museum of Historical Medical Artifacts has a machine that looks very similar dated at about 1925.

In his patent application, Applebaum explains his machine and the reason for his improvements to the general practice of suppository making:

This invention relates to improvements in apparatus by means of which suppositories and like medicaments are molded and particularly to improvements in the parts of such machines that are immediately involved in the molding operation.  It has been a common practice for pharmacists, drug clerks and others who are called upon in the ordinary pursuit of their calling to prepare suppositories and like healing articles of manufacture, to make them by hand; but that process is slow and therefore costly.  Moreover, the product is not uniform in either composition, size or weight.  The cost of hand-made suppositories if further enhanced by the loss due to breakage.  And object of this invention is to prove a machine of the kind hereinbefore referred to which will be simple in construction, comparatively inexpensive in manufacture and efficient in operation and use.  Another object of this invention lies in the provision of a suppository-making contrivance where by the loss due to breakage of the product will be reduced to a minimum and the cost of the finished articles will be lessened greatly as compared with processes heretofore in use…

Samuel Karl Applebaum was a Jewish man born in Chotin, Russia[2] on September 5, 1877.  He immigrated to the United States when he was eighteen years old, taking the ship Persia from Hamburg and arriving in New York in July of 1896.[3]  By 1910, Samuel Applebaum is married, living on Staten Island and working as a Druggist.[4]  A Samuel Applebaum graduated from the Columbia University College of Pharmacy in 1912.[5]  IN 1918, Applebaum is producing and selling drugs under the Montauk Chemical Company and is sued for selling a Sandalwood Oil product with labels that look suspiciously similar to a trademarked brand of another company.[6]  He is still listed as a “Drug Retail Merchant” in the 1920 census, so the injunction must not have hurt his business too badly.

[2] May be now known as  Khotin, of Western Ukraine.

[5] The Columbian. Yearbook of Columbia University, 1911 and 1912.  The yearbooks list two Samuel Applebaums attending the University this year.  The graduate of the College of Pharmacy is listed as Samuel A. Applebaum in the 1912 edition, which may be a misprint or a way of distinguishing it from the younger Samuel B. Applebaum in the Sanitary Engineering Department.

[7] His original petition for Naturalization was filed in the District Court of New York in 1922 and the patent filed in 1923, lists his residence as New York.  His naturalization was made official in 1928 in a California Court.