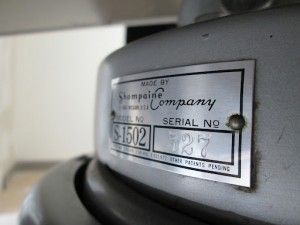 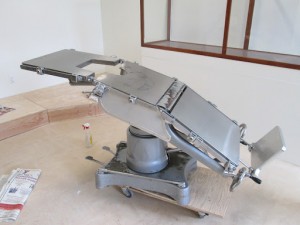 A quick Google search did not turn up much more than several other pieces from the Shampaine Company for sale on EBay.  So we turned to the U.S. Patent Office, hoping that the patent issue dates might give us an early date of manufacture for the piece.  With the following results:

The first patent explains the design being patented as:

Certain new and useful improvement in surgical apparatus of the type commonly known as operating or examining tables.  The invention has for its principal object, the provision of an operating table having an articulated top which, as a unit, may be laterally and longitudinally tilted by the action of a single shaft.  More specifically…

[it is] uniquely constructed for simplifying and reducing the number of controls heretofore requiring separate and independent manipulation, to the end of facilitating the work of the anesthetist, technician, or other operator in adjusting the top sections to meet the requirements of the particular operation or examination.[1] 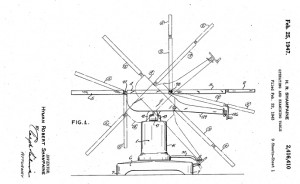 So we can assume that our table was made sometime after 1950, the latest patent date on the label.  We also know that it owes its design to Hyman Robert Shampaine, the inventory listed on the patents.

So, what do we know about inventor Shampaine?  He was born in California May 31, 1912, to Jewish Russian immigrants.[2]  As a young boy, he moved with his family  to Manhattan where his father worked as a hospital furniture manufacturer, a portent of things to come for the young Shampaine.[3]  In 1930, he is living in St. Louis in what appears to be a fraternity on Lindell Street in St. Louis, Missouri, perhaps St. Louis University which sits on the same street today?[4]  Shampaine married Leah Ree and by 1940, the young couple was living in Clayton.  He was working as the sales and office manager for a hospital furniture company, a perfect place to work as an inventor of improvements to operating tables.[5]  Shampaine passed away February 3, 2002.[6]

We still don’t know how or where this table was used at OSH.  If it looks familiar, leave a comment below.

[4] 1930 US Federal Census.  The house lists several young men living together.  Few have occupations listed, except for one individual who is listed as “cook for frat house” suggesting perhaps that this was just such an institution.