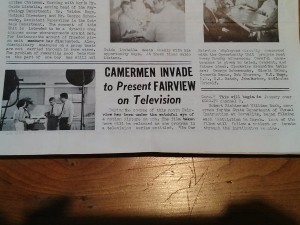 Last Spring, when I was conducting my inaugural research on Fairview, I stumbled across this video called “In Our Care” that was produced by the State of Oregon in 1959. I was reminded of this video when I stumbled across a tiny article located on the front page of The Fair View Newsletter, vol. III, no. 7 (See left).

“During the course of this month Fairview has been under the watchful eye of a motion picture camera. The film taken here will be released as one program in a television series entitled, “In Our Care.” This will begin in January over KOAC-TV channel 7. Robert Richter and William Rush, camermen for the State Department of Visual Instruction, began filming each institution in March. Most of the films will follow a patient or inmate through the institution routine.”

From this article, we can see that Fairview was not the only institution that received this treatment, but rather all of the institutions did. It is rumored that the Oregon government and the State Board of Control produced this video because the public had deep concern for the well- being of institutionalized patients. The state then produced this series of videos as a way to show to the public the life of institutionalized patients/ residents, and that they were OK. Regardless, these videos was created for educational purposes back in it’s time, and even went as far as being broadcasted on TV.

I happen to like this video, strictly due to the insight of Fairview that it gives for the late 50’s/ early 60’s. However, I warn you to proceed with caution when watching this video. Some things are disturbing and chilling. Click here to watch Fairview’s edition of “In Our Care”. After watching the video, comment below and tell me your opinions and reactions!