John’s tale begins with a paperclip.  In putting away some old records found in storage today, I came across one employee card with two rusting paperclips clipped to the back of it, making it difficult to refile the two cards I had been looking at.  Irritated, I pulled out the offending card and found the bizarre and intriguing story of John Krine/Kirne (the exact spelling is a little unclear, as you can see in the signature above).

John Krine was hired on as an Attendant at the Oregon State Hospital on April 3, 1913.  The tall, blue-eyed 52 year old widower had come from Indiana where he was previously employed as a clerk.  As an attendant, he received $30 dollars a month and worked on a ward directly supervising and caring for patients.  Krine worked at the hospital for just over two months before he was discharged, not an uncommon occurrence for new employees at the State Hospital during that time.  The payroll cards show a high attrition rate for new staff members.   If not for the paperclip, Krine would have just been another short-tenured attendant.

Underneath the paperclip, however, was a two page, hand written letter.  Sent anonymously, the letter reads

Sir.  You have, or, did have. In your employe. A. Mr John Krine, who ran away from his home and family about three months ago; he is not, just right mentaly, at times, 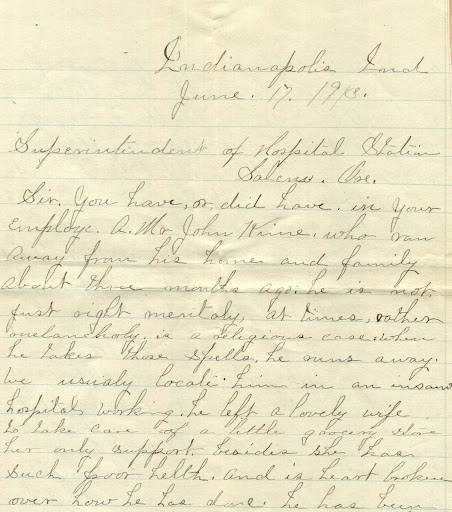 rather melancholy, is a religious case: when he takes those spells, he runs away.  We usualy locate him in an insane hospital working.  He left a lovely wife to take care of a little grocery store her only support.  Besides she has such poor helth.  And is heart broken over how he has done.  He has been married four times.  And leaves every wife this way.  It causes so much sorrow and sadness.  For his porr wife.  No doubt he will cause you all kinds of trouble.  He alway’s stays until he finds Everything out concerning the institutions, or treatment of patients.  And if thing’s are not as he thinks it should be, he goes to the governer or has a lot of stuff published in the paper.  He caused Dr. Elderharter Superintendent of the Central Insane Hospital, At Indianapolis, Ind. So much trouble in this way.  Now should you chance to have a talk with him.  Ask him if he worked at Dr. Elderharters. Insitution at Indianapolis.  And why he left. (of course he was discharged) The reason I have written to you, in this is.  I thought if you would question him, about his home; perhaps he would, return to his poor heart broken wife.  Before he takes up with some woman out there.  It would just be the same trouble.  Even again. As he would soon tire of her.  Besides I dont think. He should work in a hospital he is so nervous.  Now I know Mr. Krine well.  As I am a relative of his.  Yet do not approve of how he does.  He seems so very good.  Yet so cruel at heart.  I would rather you not tell him who had written to you.  It might make him worse.  And I am so anxious for him to return, to his wife who needs his help so very much.

As mentioned before, the letter is unsigned, begging the question of its reliability as a true account of Krine’s history.  Perhaps an envelope, now missing, gave more information as to the sender.  Regardless of its accuracy, it seems to have been acted upon.  John Krine was discharged from his position on June 23, 1913, just less than a week after its writing.