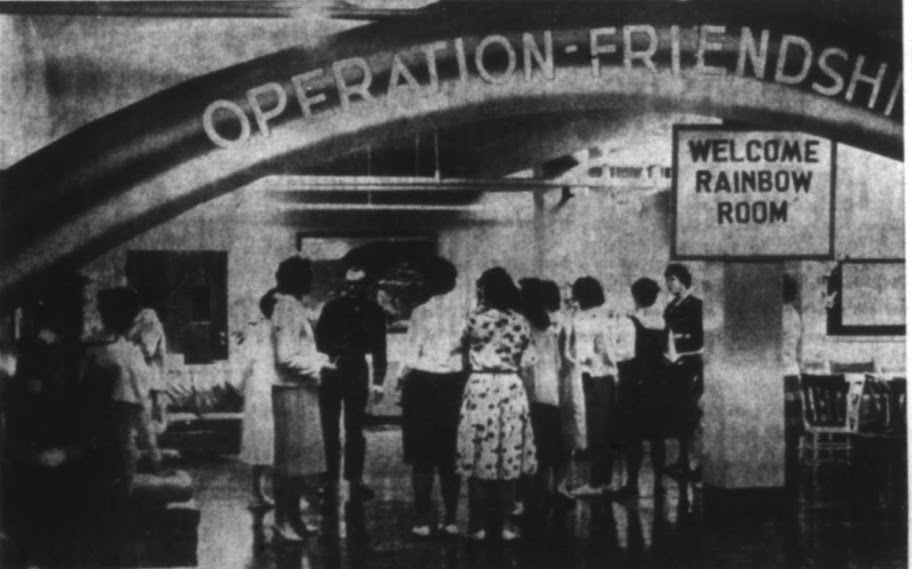 The following article was published in the Capital Journal on April 28, 1961.

A girl who had talked to no one for seven years — separated from reality by an “escape mechanism” barrier– has shown her first progress through recreation therapy at Oregon State Hospital.

Brought by a staff aide to “The Hut,” she eventually accepted an invitation to dance with another patient.

“The Hut” will be one of two recreation halls to be viewed by visitors to open house Sunday from 1 to 4:30 pm.  Operated by a governing group of patients called the Quoncil, the quonset hut-shaped building is the site of patient-planned parties and dances.

Patients sell doughnuts and coffee, elect their own officers and schedule their own recreation with a minimum of supervision.  The musically inclined play in a small dance combo– another forward step in their preparation to return to the community.

The other recreation hall is the “Rainbow Room,” a brightly decorated basement room on the other (north) side of Center Street NE.

The opening of a one-room school last October was another milestone in the hospital’s move to supplement the older methods of counseling and drug treatment.

An average of 25 children from 8 to 19 come from many wards for at least one hour a day in one of four groups.

The children too mentally ill to profit by school do not attend, of course.  Most of them with “campus cards” or ground parole, come alone, but a few are brought by aides.

Mrs. Janice Stein, the teacher, is able to give individual attention and to see to it that each one experiences the satisfaction of successful accomplishment at his own speed.

Special classes will be set up Sunday with youngsters on hand to display their school, Mrs. Stein said.

And there is a PTA, the teacher pointed out, only it is the Psychiatrists and Teachers Association

Oregon State Hospital will be regarded less and less like “outer Mongolia” or a deadend street of padded cells to visitors at open house Sunday, the opening of Mental Health Week.

The hospital staff is proud of it.  Taxpayers will be, too.

Visitors from 1 to 4:30 p.m. will see incredible changes since the system began to go into operation in 1958 in treatment of non-organic mental disorders.

Rather than being conducted on tours, as in past years, visitors will be able to go where they want to, within reason, staring from the admissions building on the north side of Center Street NE.

In a civilization of increasing frustrations, when mental illness is increasing at all levels of society, the shift from a “custodial” to a therapeutic hospital is a double benefit.  Besides the humane factor, there is the cost of $3000 a year per patient, not counting investments in buildings or medicines.

More than half of the wards are carrying out group treatment, a method brought to its peak here by Dr. Maxwell S. Jones, who came here nine months ago on a challenge by Dr. Dean Brooks, superintendent.

Dr. Jones is one of the best known hospital psychiatrists in the world.  Here is the way he explained operation of group therapy:

“It was the tendency in the past for patients to play passive roles, but now the trend is for them to be actively involved in helping to run wards and to make decisions in ward matters– even on privileges and discharge of other patients.

“The final decision, of course, remains with the doctor in charge.

“It brings the patients closer to reality and more aware fo their behavior and its effect on other people.  Groups help to overcome the feeling of isolation which all patients feel and they are motivated to help each other.”  Dr. Jones continued.

“The doctor, aides and patients in a ward discuss how they are treated, for example, and the patients’ reactions are observed.  If a patient walks out in anger, in time he may reach the point of discussing why he dealt in that way with his feelings of rejection.

“A patient is in here because he failed in society some way– felt inadequate, rejected, misunderstood.  He found the world painful and made a world, in his mind, to suit himself, thus losing contact with reality.”

“The group therapy has resulted in much better patient management.  We may bring their families into the group.  It makes patient ordinary people.  We want patients who have withdrawn and won’t talk to articulate and being to relate themselves to reality.”

Dr. Jones, director of education and research, has cited Ward 9 as an example.  This is a ward that once was inhabited by 61 men considered violent, many of whom required frequent electro-shock treatments and restraint.

One of the men was so regressed that he had not spoken for 15 years.  AFter group therapy, weaving, typing, reading, dancing, cookery and other methods were introduced, he gradually came out of it and plays the piano ably.

Shock therapy almost is gone in that ward, where 15 now are given ground paroles and 30 are working for the hospital.

Music therapy services are provided by Mu Phi Epsilon music sorority in Ward 8 and 2.  Mrs. Cathryn Springer, volunteer services director, noted that one man who had not spoken for 30 years was “brought out” to the point that he sang every song.