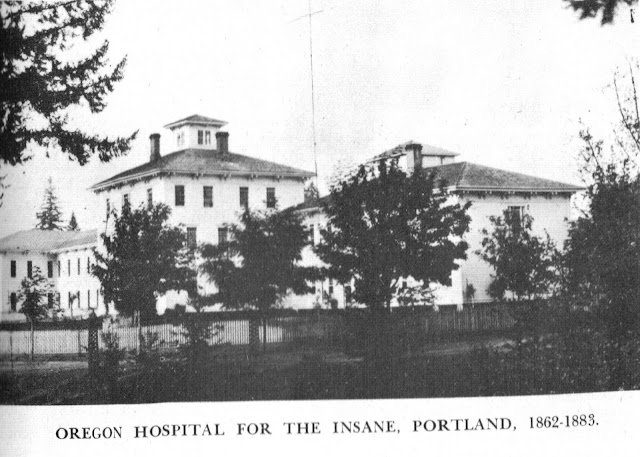 The first institution in Oregon devoted to the care of the mentally ill was the Oregon Hospital for the Insane.  Drs. James C. Hawthorne and A.M. Loryea opened the private hospital in September of 1861 in a temporary building on Taylor Street between First and Second Avenues in Portland.  Somewhat ironically, the proprietors made it very clear that their hospital was only a temporary fix for the state’s mental health care needs, and stated at the dedication of the new institution that they would happily turn over their patients to the state in the event that it created an asylum to care for them.

In 1862, the hospital was moved to a new building off of Hawthorne Avenue, east of SE 12th Avenue.   The State of Oregon contracted with the hospital in the fall of that year to provide services for “indigent insane and idiotic persons” that were court ordered there.

[1]
The hospital treated court ordered and private patients suffering from many forms of diseases including what Drs. Hawthorne and Loryea described as: mania, monomania, melancholia, dementia and idiocy.[2]

Visiting physician Dr. J.S. Giltner gave this description of the hospital in the year 1868:

In the summer of 1866, several acres of ground, shaded by a beautiful fir grove, were enclosed with a high board fence, and well provided with swings and various other fixtures for gymnastic exercise, for the benefit and amusement of the inmates; also, games of ball, draughts, and quoits were introduced, all of which is calculated to divert their attention and produce a soothing effect on the mind.

The following named articles constitute the diet: Meats: Beef, pork, mutton, and salmon, both fresh and salted.  Vegetables—Potatoes, cabbage, turnips, onions, tomatoes, parsnips, lettuce, beets, beans, peas, etc. Drink—Coffee and tea.  Fruit—of various kinds in season; and dried when out of season.  Bread of the best quality is supplied in abundance.  Sugar and molasses are furnished at all the meals.

The building is divided off into wards, each one of which contains a water closet, and a bath room, with hot and cold water for bathing purposes, constantly kept in good order.  This is a great convenience, and greatly adds to the health of the patients.  The whole building is constantly kept scrupulously clean and thoroughly ventilated.

The dining rooms, kitchen, and bake house are well supplied with all the necessary fixtures, and the most improved utensils are provided, all of which are kept neatly and in proper order.

The dispensary connected with the place is always supplied with a good stock of standard drugs, and is always kept in excellent condition.

Sewing and knitting and ironing is the employment of the females.  They manufacture the greater part of the clothing worn by the males, and all that is worn by themselves; affording them light employment, and relieving the monotony of their confinement.  A limited number of the convalescent males is employed at different kinds of out-door work on the farm and in the gardens.  It would be a great advantage if more were so employed, as it would hasten their restoration; but the limited number of attendants will not admit of it.  The clothing worn by the males is of Oregon manufacture, of good quality; and that of the females is calicoes and all are constantly kept neat and clean.

The supply of water comes from an excellent spring, which is thrown into a large reservoir.  The reservoir is on a high tower, built expressly for this purpose, with hose attached of sufficient length to discharge water on any part of the building.[3] 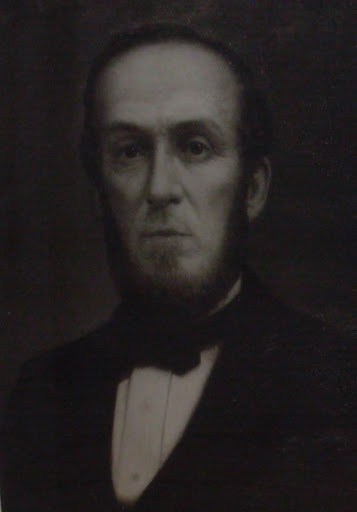 In 1872, Loreya sold his portion of the hospital to Dr. Hawthorne and moved back to San Francisco.  In 1880, the Oregon State Legislature finally appropriated funds for the building of an Asylum in Salem, finally getting the ball rolling on a project years in the making (land had been secured for the building as early as 1868).[4]  Dr. Hawthorne died in February of 1881.  Upon his death, Dr. Simeon Josephi took over the operation of the hospital until the completion of the Oregon State Insane Asylum in Salem.  On October 23, 1883 Dr. Josephi and Mrs. Hawthorne (wife of the late Dr. Hawthorne) transferred control of the patients in their care to a board of trustees consisting of state officials.  From October 22-24, 370 patients were transported from Portland to the new facilities in Salem by rail.[5]

[1]Oregon law predating statehood had special provisions for those who were deemed by a court to be mentally disturbed.  In the case where there was no family to provide for these people, they were to be treated as paupers and to be given state assistance per those rules.  For a detailed history of the laws relating to mental health as well as the history summarized above, check out Olaf Larsell’s book The Doctor in Oregon.  Portland: Oregon Historical Society, 1947.   Chapter XV.