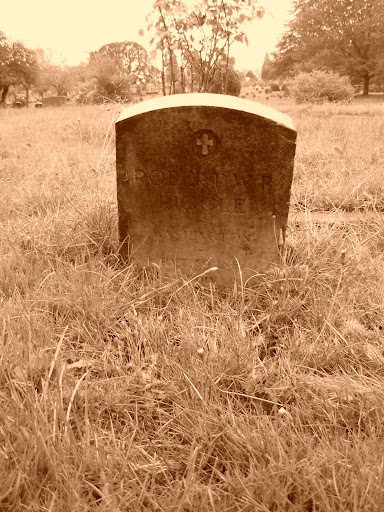 Veterans Day is tomorrow.  On the day that we remember the sacrifices made by members of our armed forces, here is the story of one veteran who is a reminder that not all causalities of war happen on the battlefield.

[1]
Sometime around his 7th birthday, Robert and his family moved to Idaho where his father farmed.[2]  The next Federal Census finds a 23 year old Robert employed as a coachman for Dr. Henry John Minthorn, his wife and their two daughters in Newport, Oregon.[3]  (The Minthorns are the same family that raised orphaned, 11-year-old future U.S. President Herbert Hoover twenty-five years earlier). By 1917, Robert had moved to Mount Vernon, Washington and was working for a shingle manufacturing company.  He was young, single and without any dependent relatives, which qualified him for military service in WWI after President Wilson passed the Selective Service Act in May of 1917.  Along with all American men ages 21-31, Robert registered.  Interestingly enough, Robert did claim an “exemption from the draft” on the grounds of a physical disability he described as “fainting spells.”

Despite this disability, the slender, black-haired, brown-eyed, 31 year old Robert enlisted in the Army in Mount Vernon, Washington on October 4, 1917.  He was assigned to Company “B” of the 361st Infantry Regiment, part of one of two infantry brigades of the 91st Division American Expeditionary Force.[4]  While the division was made

up of soldiers from the eight western states (OR, WA, CA, NV, UT, ID, MT, WY) and Alaska Territory, Robert’s regiment came mostly from Oregon and Washington.[5]  Robert’s training took place at Camp Lewis (now Fort Lewis) just south of Tacoma and included instruction in “Military discipline and courtesy, insignia of United States Army, Articles of War, visual signalling [sic], care of rifle and equipment, preliminary tests and training for range practice, bayonet exercises, hand grenade lectures and practice, and trench warfare…,automatic weapons and gas defense.”[6] It appears that after three months of training with the 361st, Robert was transferred to the 59th Infantry Regiment of the 4th Infantry Division, a common occurence for the 361st who were routinely stripped of enlisted men needed on the front.[7]  Robert shipped out to France on May 5th, 1918.  [8]

“The day had been continuously cold and a drizzling rain had been falling much of the time.  The diet was entirely “bully beef” and hard tack.  The chlorinated water had run out and pending the arrival of the water carts, men were permitted to fill their canteens from the nearby running stream.  German overcoats, gloves and blankets were being gradually added to individual equipment.  Nearly all remaining carrier pigeons were here released with messages to Division Headquarters. The men had received many new experiences that day, many “close-ups” with enemy machine guns and with well hidden snipers, much fighting around hedges and stone huts, many high explosive and shrapnel shells landing in their midst, often in salvos of three and four at a time, and enemy airplanes swooping to 200 feet above our lines and sprinkling the men with machine gun bullets while at the same time evidently sending target locations to the enemy artillery.  One enemy airplane had been seen to destroy in rapid succession three American observation balloons, which burst into flames while the observer sought safety with his parachute…All were becoming more used to the snap and crack of passing rifle or machine gun bullets, and were becoming better able to judge the danger zone of busting shells.”[9]

Robert survived the war and was honorably discharged on demobilization of US Forces on May 18, 1919.  His military records indicate that “In view of occupation he was, on date of discharge, reported 0 per cent disabled.”[10]

Upon his return home, Robert spent the winter with his youngest sister Ada and her husband, carpenter Fred Peek, and their two little girls in Sutherlin, Oregon.[11]  He was employed as a tile layer during this time.  The local paper recounted, “At times he was rational, but his injuries received on a battle front in France left him mentally unbalanced.”  As a result, he was sent to court where it was determined by a judge that he should be committed to Oregon State Hospital.  The newspaper reported that: “Just prior to his commitment, Riggle stood before Judge Stewart in the court house at Roseburg, with tears in his eyes said: ‘Judge, it’s hell to be sent to Salem after all I’ve gone through over there.’” [12]

Robert was admitted to the hospital on March 6th, 1920.  The admissions records cite the “cause of insanity” as being “Gassed in the Army.”[13]  His obituaries, in both the Salem and Sutherlin papers, ascribe the symptoms he was suffering to “shell shock” and “shell wounds and gas received as a soldier at Chateau Thierry and in the Argonne forest.” [14] Although outlawed by international treaty (the Hague Declaration Concerning Asphyxiating Gases), both sides made regular use of debilitating gases including xylyl bromide, ammonia, chlorine, phosegene and mustard gas throughout WWI.  By the end of the war, “over 124,000 metric tons of 39 different toxic agents…inflicted nearly one million causalities on all sides” and accounted for 26.8% of all American causalities.[15]  The term ‘Shell Shock’ was coined after World War I to describe a number of pyschological reactions caused by exposure to battle situations during the War.  A 1918 publication describing it notes that “the troubles displayed in the many disorders classed under the official title shell-shock are extraordinarily numerous and different…” and that it was difficult to describe because it was often combined with the effects of chemical poisoning and physical wounds. [16]

Hospital records regarding Robert’s short stay at OSH are sparse, and it is impossible to know what he was thinking or feeling, or if the symptoms he had were aligned with what we know today as Post-Traumatic Stress Disorder.  The newspaper describes Robert as despondent and depressed upon his arrival at the hospital.[17]  Doctors in England treating soldiers suffering from the various levels of “Shell Shock” described what they saw in many of the men that came through the hospital in 1918:

“In civil life we often meet with cases of nervous breakdown uncomplicated by any gross physical injury.  We are scarcely likely, for example, to meet it complicated by gas poisoning and a bullet wound.  Yet such combinations as these – or worse- are to be met with in the hospitals every day…A common way of describing the condition of a man sent back with “shock” is to say that he has “lost his reason” or “lost his senses.’ As a rule, this is a singularly inapt description of such a condition.  Whatever may be the state of mind of the patient immediately after the mine explosion, the burial in the dug-out, the sight and sound of his lacerated comrades, or other appalling experiences which finally incapacitate him for service in the firing line, it is true to say that by the time of his arrival in a hospital in England his senses are usually not lost but functioning with painful efficiency.  His reason tells him quite correctly, and far too often for his personal comfort, that had he not given, or failed to carry out, a particular order, certain disastrous and memory-haunting results might not have happened.  It tells him, quite convincingly, that in his present state he is not as other men are.”[18]

Robert spent two months and 29 days at OSH.  He was considered a “reliable” patient and was given freedom to move about the hospital grounds on his own.  On June 4th, 1920, purportedly after another patient complained about his snoring, Robert walked out to the loft of one of the hospital barns and shot himself. [19]

Robert is buried at the Pioneer Cemetery in Salem.

[1] There is conflicting information about the exact birthdate.  One obituary lists him as 23 years old at the time of his death.  The 1900 census lists his age as 10.  His military records, however, list his birthdate as August 8, 1886.  WWI Draft Cards 1917-1918, National Archives.  Accessible digitally through Ancestry.com. NOTE:  The draft card is handwritten, but appears to be Borton as his second middle name rather than Burton, but Burton appears elsewhere.