A Survey of State Mental Institutions, 1940

A Survey of State Mental Institutions, 1940 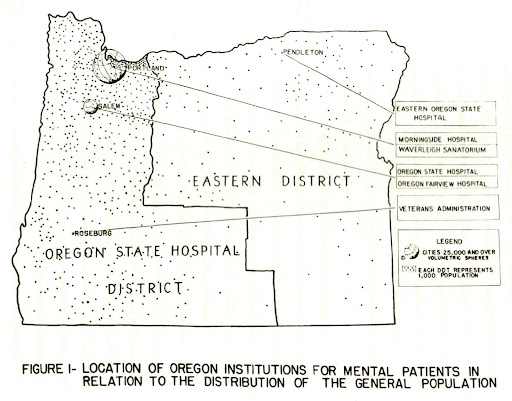 The above figure is from a 1940 survey conducted by the United States Public Health Service.  The survey goes into great detail about the history and situation of the six institutions in Oregon “caring for patients with mental disease, mental deficiency, and epilepsy.”  Here is a sampling of the information included in the survey…

“On an edge of the City of Salem, the capital of the state, and on a site slightly higher than most of the city is a goodly tract of almost level land.  Here stands the main plant of the Oregon State Hospital.  The hospital owns 1900 acres of fertile, rolling prairie land, and rents 300 more.  Some 1500 acres are under cultivation…The original building is like a capital E, the center containing offices and quarters; the short central area the service units, the assembly hall and a few wards; and the long arms three tiers of wards, the men’s wing having been extended farther back than the women’s wing.  (pg 6-7).

“Pendleton is a city of 8,000 population in north-eastern Oregon.  A mile and a half west of the city the main highway runs through the grounds of the Eastern Oregon State Hospital.  This is a very hilly region.  The hospital occupies some bottom land along the Umatilla River, and its acres run up the neighboring slopes…Not far from the highway the Union Pacific Railroad parallels it across the hospital property, and runs therefore through the front yard of the main hospital building…This institution consists of one large building housing patients, and other buildings for service purposes.  The

[main building] is an attractive brown stuccoed structure.  Construction is of reinforced concrete throughout and quite fireproof.  Some floors are tiled, some are of concrete covered with plastic, and a few are of wood…Guards on the porches through intended to be ornamental do give somewhat the appearance of barred cages.  A very few patients live at the ranch houses and work on the farm.” (pg 12-13)

“The Oregon Fairview home is beautifully located a few miles out of Salem at the edge of the Willamette Valley, with some of its buildings located on the hilly slopes.  Six hundred and seventy acres of fairly fertile land are owned and most of it is cultivated.  Its plant comprises a series of cottages of different style and design but sufficiently harmonious so that the plant is attractive.  All grades of defectives under the age of forty-five are received here…the institution attempts to give such schooling as will be useful to the children who come to it and to train as many as possible to return to life at home or elsewhere in the community.” (pg 50)

Located in Portland.  Receives federal funds.  Cares for patients in Oregon, but who are residents of Alaska.

University of Oregon college of Medicine

“The out-patient work of the University of Oregon Medical School (Portland)  is a significant and important project, impinging on the field of activity of the hospitals.  Its purpose is to provide advice and treatment for persons with mental ailments who are not in need of hospital care, or who for some reason are not yet able or willing to accept hospital care though they may need it.” (pg 51)