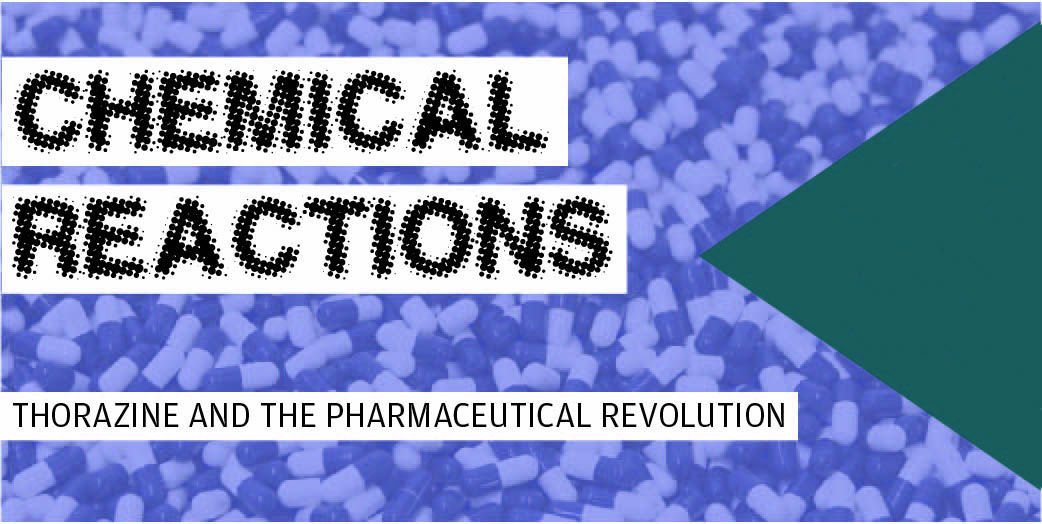 This web exhibit is based off of a changing exhibit on display at the Oregon State Hospital Museum of Mental Health from 2019 – 2020.  It is reproduced in part here.

For many people who have been diagnosed with a mental illness, medication is a part of their treatment. While the use of pharmaceuticals is now common both inside and outside the Hospital, at one time these were seen as new and revolutionary. One of the more well-known drugs that started this “pharmaceutical revolution” was Thorazine. The use of Thorazine and other neuroleptic drugs sparked a trend in psychiatric treatment that was seen at the time as a major breakthrough in treatment methods, and a way to bring more people out of institutions and back into their communities. The drug, however, is not without controversy, and patients, consumers, and the medical community all have expressed various opinions on its use and effectiveness.

As you go through this exhibit, think about how mental health medication might impact you and the people in your life. How would you feel if you were prescribed Thorazine or a similar drug?

Thorazine is the trade name for the neuroleptic drug Chlorpromazine. First synthesized at Rhone-Poulenc Laboratories in France in 1950, Chlorpromazine was initially used as an antihistamine and a pre-anaesthetic agent for surgery. Medical staff observed that patients taking Chlorpromazine before surgery became calmer without being rendered unconscious, and this led to research into the potential psychiatric benefits of the drug.

Chlorpromazine became an available prescription in France in 1952 under the name Largactil. The drug was prescribed for a diverse range of conditions, but quickly became mainly used in psychiatric treatment. In the mid-1950s, Chlorpromazine would be introduced to the United States as Thorazine, an clinical trials were conducted at state mental hospitals across the country. The use of neuroleptic or antipsychotic drugs was considered revolutionary at the time, because patients that were once seen as unable to receive treatment began making significant improvements.

Thorazine was seen as being the most beneficial in the treatment of schizophrenia. While it was not a cure, the drug removed some of the symptoms that were barriers to treatment. Thorazine and other neuroleptic drugs are effective dopamine antagonists. This means that the drug blocks dopamine receptors in the brain. At the time Thorazine first came on the market, it was believed that illnesses such as schizophrenia and bipolar disorder were linked to high levels of dopamine activity in the brain. While this hypothesis has changed over time, many neuroscientists and psychiatrists continue to believe that there is a connection of some kind between these illnesses and dopamine in the brain.

‘Thorazine’ is highly effective in controlling symptoms of psychosis or neurosis, whether of organic or functional orgin. ‘Thorazine’ calms anxious, agitated, protesting and rebellious patients, inducing placidity and relaxation. Intelligence, memory and judgement are left intact, or, in the case of many psychotics, are even strikingly improved. Frequently, receptiveness to psychotherapy is markedly enhanced.
-Clinical Uses of Thorazine, Smith, Kline & French Laboratories 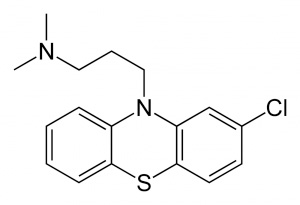 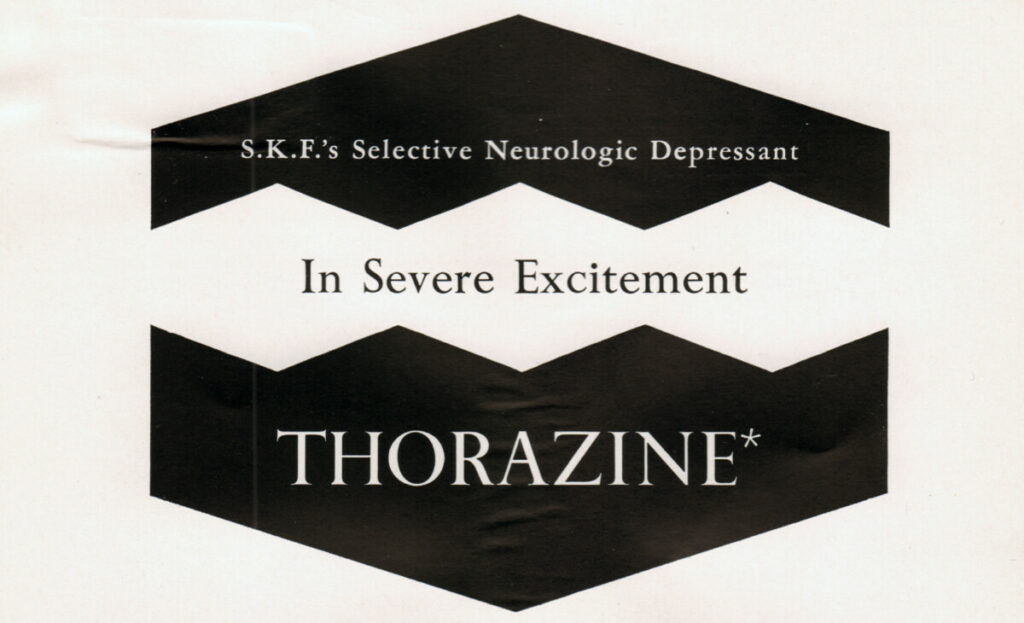 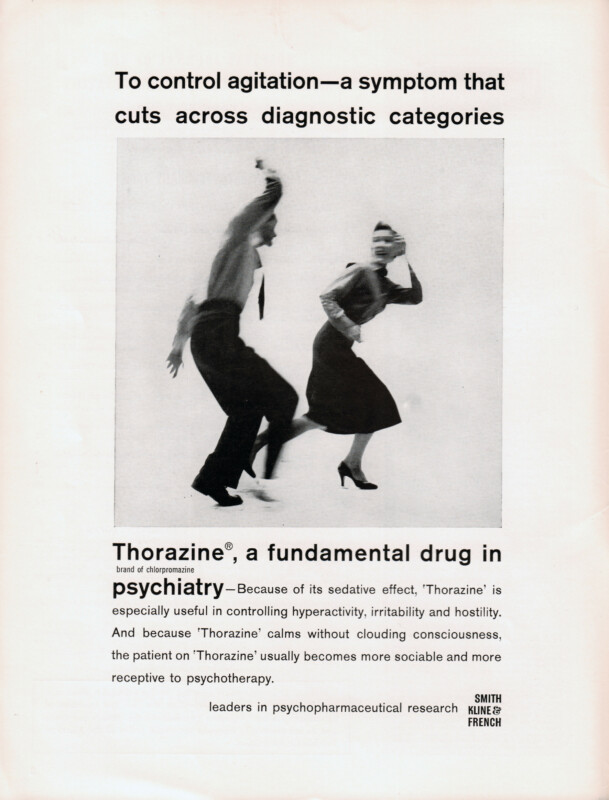 The effect has been most striking on the wards where chronically disturbed patients reside. Agitation is lessened, many patients become communicative, patients out of touch with their families for years resume correspondence, indifference is often replaced by interest in ward activities and recreation. In brief, our chronic wards have an entirely different atmosphere and new avenues of approach to the patients have been opened.
-Donald Wair, M.D. Superintendent Eastern Oregon State Hospital, 1957 Biennial Report

Breitenbush Hall (35 Building), the solarium of which was closed in 1977 to be used as the pharmacy for the Hospital. Museum of Mental Health Collections. 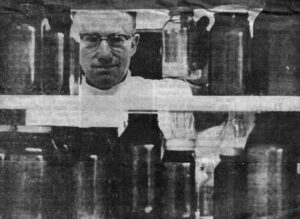 Along with other state hospitals across the country, the Oregon State Hospital conducted drug trials for tranquilizing and antipsychotic drugs such as Thorazine. In the fall of 1955, forty “extremely disturbed” patients participated in a Thorazine drug trial at the Hospital. Two male and female patients in particular were selected based on their inability to respond to other types of treatment. The drug was donated by Smith, Kline & French, an arrangement they set up with many other state hospitals. IN the case of the female patients, other forms of treatment, such as occupational and recreational therapies, were increased in addition to the use of medication. The results of the study showed a general improvement for 75 percent of test subjects, with nine patients being discharged from the hospital by the end of the year. While the results of the study noted the usefulness of Thorazine, it also highlighted the importance of other types of psychotherapy. Of the nine patients that were discharged, eight were women who participated in additional therapeutic programs.

This was not the only drug research that was conducted at the Oregon State Hospital. The Education and Research Department, formed in the 1950s, oversaw studies on a number of pharmaceuticals, which included more testing on Thorazine and other tranquilizers, antidepressants, and antipsychotic drugs. This research was conducted by hospital medial staff as well as individuals in the hospital’s residency programs.

Thorazine and other neuroleptic drugs have always been used at the hospital in combination with other treatment methods. While medication use increased significantly in the years following the Thorazine drug trials, other types of treatment persisted including hydrotherapy, electro-convulsive and insulin therapies, and psychosurgery.

At the hospital today, medication is still a potential part of a patient’s treatment plan. Pharmaceutical use continues to be in conjunction with other types of therapeutic methods. 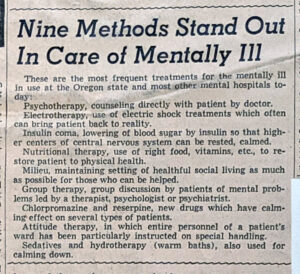 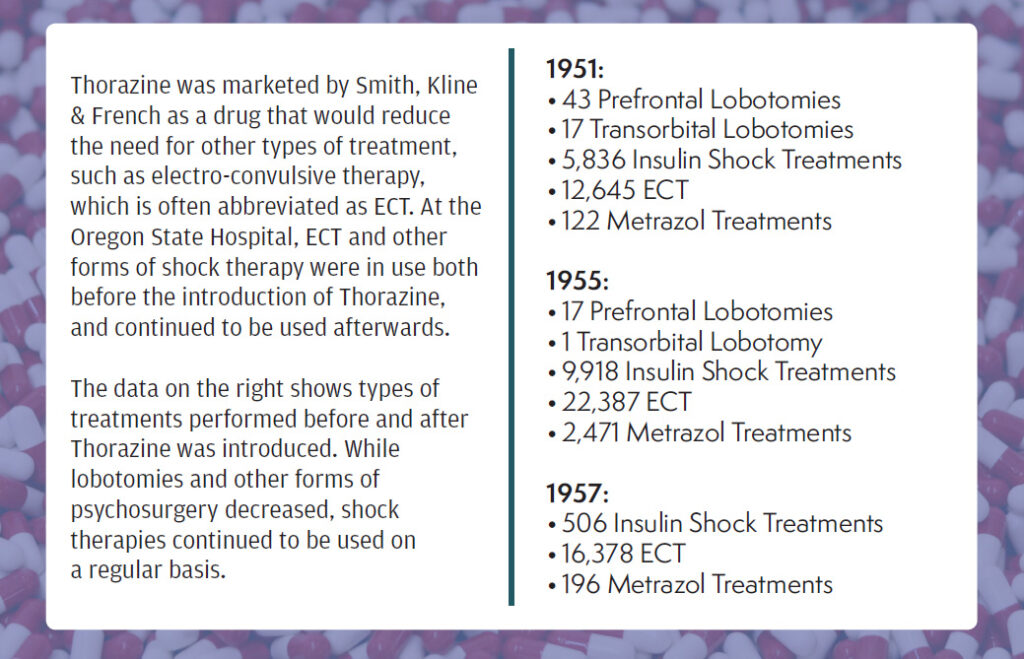 As with most drugs, Thorazine usage can come with a number of short- and long-term side-effects. These can include dizziness, weight gain, difficulty sleeping, dry mouth, nausea, and blurred vision. Major side-effects that are the most commonly associated with Thorazine use are the neuromuscular reactions that the drug causes. These include Parkinsonism and Tardive Dyskinesia, or involuntary or uncontrollable muscle spasms and twitches. Some of these motor function side-effects would stop after a patient discontinued their use of Thorazine, but for some individuals, they were irreversible.

When the patient is manageable, psychotherapy may be initiated and dosage should be gradually reduced. If symptoms re-appear, dosage should be immediately increased, for control once lost is difficult to regain.
-Clinical Uses of Thorazine, Smith, Kline & French Laboratories. 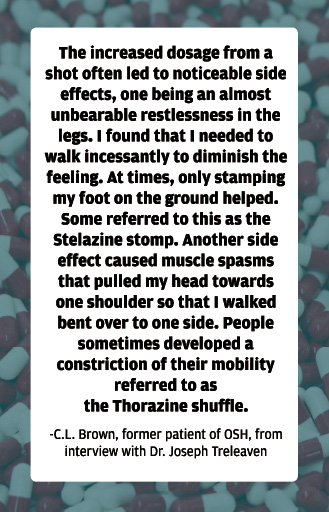 The utilization of the newer “tranquilizing” drugs has occupied a position of much prominence in the public eye as well as the actual application to hospital work. Unwise publicity has led relatives to expect miracles. The eventual position of these drugs in the field of therapy is yet to be assigned. Certainly they will not empty the mental hospitals. Just as certainly, they are a valuable adjunct.
-Donald Wair, M.D. Superintendent Eastern Oregon State Hospital, 1957 Biennial Report

Deinstitutionalization can be defined as the large scale depopulation of state hospitals. The goal of this movement was to discharge as many people from centralized institutions with the idea that continued care would take place within their own communities.
Many have linked the decline in state hospital population with the advent of antipsychotic drugs, with Thorazine seen as a way to finally return patients back to society. This may be simpler than the reality.

While pharmaceutical use played a role in the discharge rates of patients at the Oregon State Hospital and in hospitals across the country, there are many other factors that contributed to this decline in population. These included economic and political changes, as well as new approaches to programming and non-pharmaceutical treatments.

National legislation such as the 1946 Mental Health Act, changes to the structure and budget of the Oregon State Hospital, and advances in other therapeutic programming were all factors in the increased discharge rates of patients that were seen in the late 1950s and 1960s. 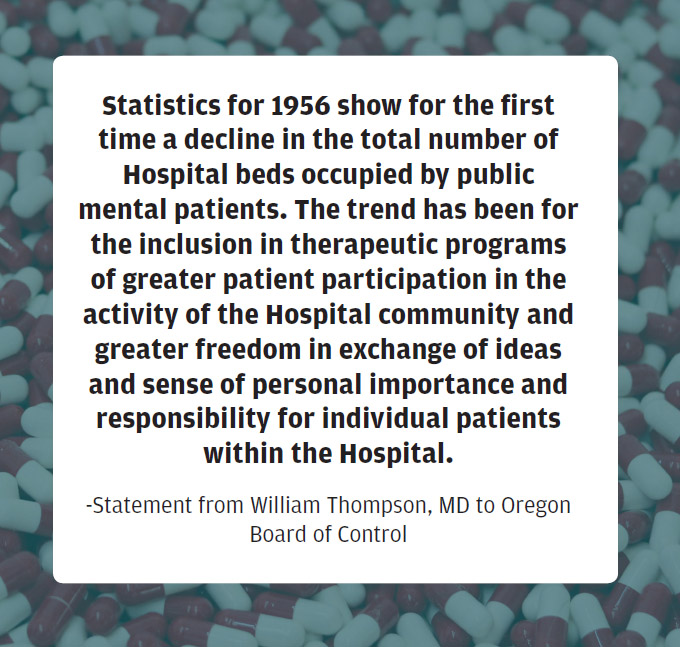 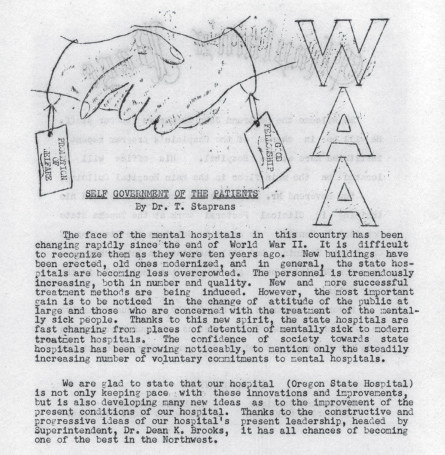 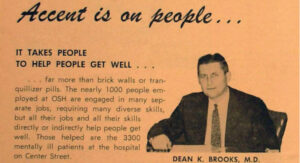 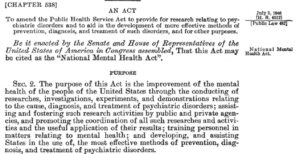 Excerpt from the National Mental Health Act of 1946. 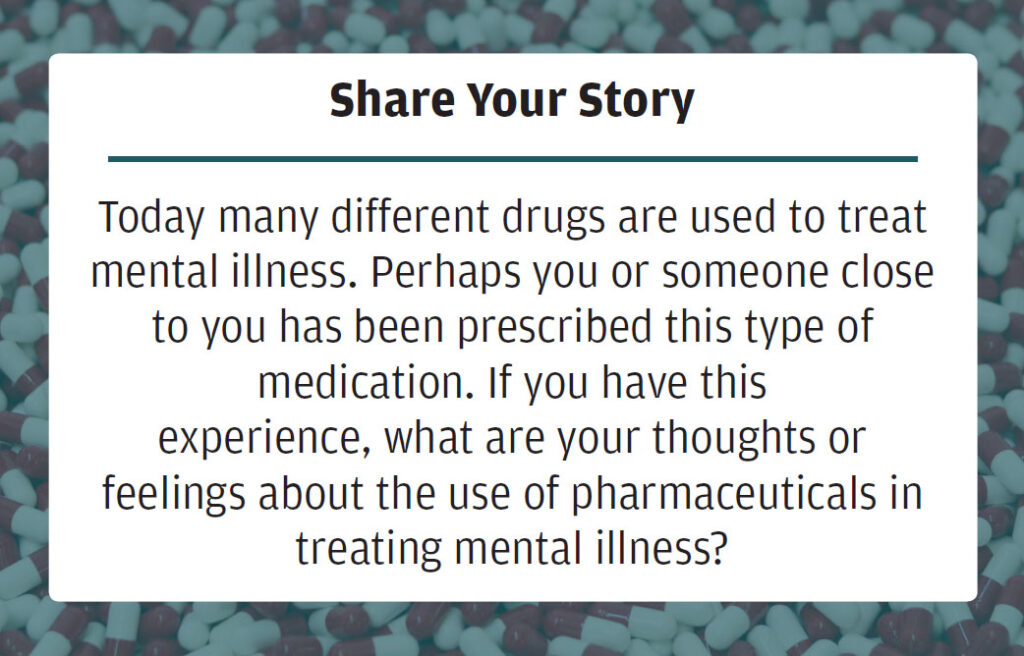